“Doctors Short!” Stating the obvious perhaps, but this was the screaming front page of the Post Courier on May 25th. 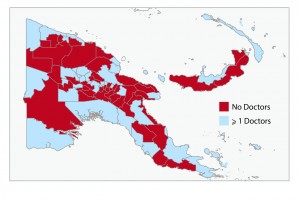 Reviewing the current status of the medical workforce outside NCD, 49 of the 88 districts had no full time doctor present. This represented a population (using 2011 census data) of over 3.24 million people without access to medical care.

Given the fact that doctors based in provincial centres are for the most part not covering populations outside the LLG in which they reside, it is certain that a LLG by LLG breakdown of this data will give an even greater sense of urgency to the crisis.

4 thoughts on “More than half of PNG’s districts have no doctor.”